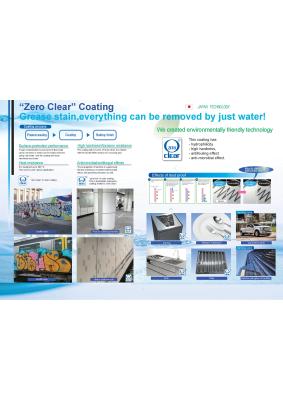 [Product description] The Zero Clear inorganic coating agent is friendly to the environment due to its high hydrophilicity. You can wash off even surface oil stains just by using flowing water. It has high resistance to scratches, abrasion, heat, and bacteria, and so it can be applied to washing machine drums, road reflectors, and kitchen utensils. You can anticipate reduced cleaning costs and various other uses. [Intellectual property] Number of related patents acquired: 6. 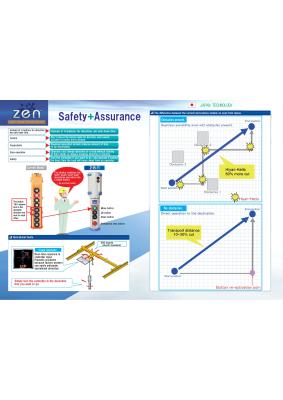 [Product description] “Zen” is safer and easier than conventional type of crane controller. In Buddhism, “zen” means not only concentration, but also means awareness. We’ve been thinking about safety and security in factories with “zen” mindsets. If you are using conventional type of crane controller, you’ll know that has four direction buttons like north-south-east and west, but it can sometimes cause human errors by button press mistake. We put them in to just one button instead of four. Just twist to change directions instead of always have to look at the factory walls for directions. In one of the factories in Japan “Hiyari-hatto” or “nearly-missed incident” has been reduced by 95% after introducing “zen.”. And also in another factory in Japan, transfer efficiency has improved by 30% after introducing “zen”. And also, we handle a display “UEYOSHI” which can indicate the direction of the movement beforehand. Our products have already been chosen by TOYOTA, AISHIN, DENSO, and other leading companies in the field. We are confident that we meet your needs and demands. Our mission is to pursue safety and security in the factories. And finally, we devote ourselves to decrease industrial injury, create safer environment, and achieve the goal of zero accidents. [Intellectual property] Number of related patents acquired: 8.

OSHIN Co., Ltd.
Our business areas include kitchen equipment, shoes , and aluminum. We have the top share in the market of earthenware cooking containers with carbon heat generators. Our heat-storage lightweight aluminum steak plates are IH-adaptable with different metals combined with aluminum. We are currently developing cooking heaters with temperature sensitive magnetic materials.